Tetris for the Philips CD-i released in 1992. It features a New Age-style soundtrack by Jim Andron. It is possibly the first version of Tetris to be released on optical media.

In Tetris for the CD-i, pieces can not be soft dropped, only hard dropped using the second button. There is no lock delay; keeping your stack low is to the player's advantage for survival.

Before starting the game, the player may select their starting level, and a height. Changing the height from "0" will start the game with very sparse garbage rows.

Like Tetris (Sega) the game has a ceiling which blocks pieces from rotating. However, due to the faster gravity it is seldom a nuisance.

When the game ends you have the option to enter your name for a high score which is saved to the system's memory.

During the line clear delay, or level changes, if the player presses left or right and releases, when the next piece appears in the well it will move one cell in the direction the player pressed. 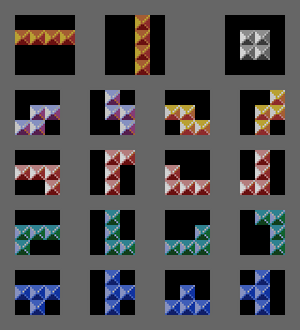 There are no wall kicks, and pieces can only be rotated counter-clockwise. The rotation system is reminiscent of Sega rotation, with pieces aligning to the floor, though some offsets are different. Pieces also spawn right handed instead of the left seen in Sega rotation.

Points are only scored when placing pieces. Points earned by placing a piece is affected by the height of the piece when it locks. Higher placements are awarded more points. Clearing lines does not award the player any extra points.

Hard dropping a piece also awards more points, and the amount is determined by the height of the hard drop.

Each stage features a new motion background, and new song. Clear lines to progress to the next stage. To increase a level a minimum amount of line clears is needed. For example, when starting from level 0 or level 1, the total line clears needed to reach level 2 is 21.

Because the CD-i was a commercial failure, and the relative age of the game, it mostly went under the radar for years. Eventually around 2016 people started rediscovering the game, and the soundtrack. Many blog posts were written about it, promoting it's quality and vaporwave sound.[1] Along with that came a slew of mashups, remixes, and covers.

In February, 2020, a bootleg vinyl of the soundtrack was released by Unfortunateface, which was released without Philips' or Jim Andron's knowledge. Unfortunateface had tried to establish contact with Andron, and had set aside the profits from the sales for him. Eventually the matter was settled, with Andron saying a less limited release was in the works.[2]