From TetrisWiki
Jump to navigation Jump to search
The T piece is stuck and cannot kick up, only rotate once left or once right. 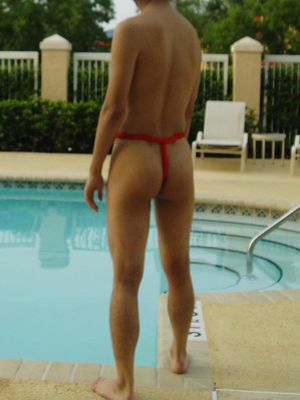 This is what a traditional fundoshi swimsuit looks like. 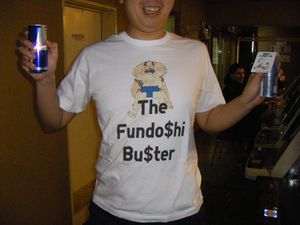 A fundoshi-themed t-shirt from Pier21.

A fundoshi is a situation that comes up where a T piece is immediately stuck in a pit after spawning, forcing the creation of a hole. In ARS under 20G gravity, this happens when there is a 2 unit (or more) deep hole in the 5th column. The T piece's initial orientation, as well as both clockwise and counter-clockwise IRS orientations, are all forced to get stuck in this hole.

The name comes from the visual similarity with the traditional Japanese bathing suit fundoshi. The walls on either side of the 2-deep hole resemble legs, and the T piece resembles the backside of the garment. The imagery of the fundoshi is an iconic part of promotions surrounding Pier 21's long-running The Masters tournaments, where it is typically depicted using the image of a sumo wrestler's butt. Despite this popular imagery, which technically is a related garment called a mawashi, players refer to this situation as a fundoshi rather than a mawashi.

In practice strong players have no difficulty stacking in a way that prevents fundoshis from happening. However, several games (including 2 from Arika) appear to have modifications to their rules which suggests the fundoshi may have been considered an undesirable feature of the game design. These modifications give the player tools to prevent or escape a fundoshi