Difference between revisions of "Zangi-move" 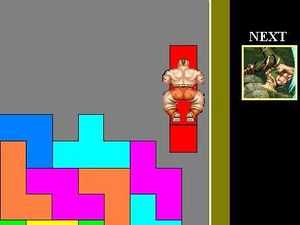 A zangi-move is a technique introduced in Tetris The Absolute The Grand Master 2, made possible by the combination of sonic drop and manual locking. To perform the move, you press up to drop the piece, left or right to move the piece over, and down to lock the piece in place. Doing these inputs in a single circular motion of the arcade stick feels very familiar to doing Zangief's (Street Fighter II) Spinning Pile Driver move. It particularly useful when playing in time attack, as you save a significant amount of time by not having to return the stick to its neutral position. Zangi-moves are not possible with locking hard drop, which would appear to make use of shoto type moves.

This move is most useful for tucking pieces underneath overhangs, an operation that costs much time in most other Tetris games. However, it is also used in other situations where the speed gain is more subtle. If you wish to place a piece one space away from the spawning location, you will can so with a half circle zangi-move. If you want to place a piece one space away from a wall, you can use DAS to get to the wall quickly, and then use a zangi-move to lock the piece, all in one continuous 3/4 circle zangi-move.