Difference between revisions of "Tetris X"

Tetris X, released for PlayStation in Japan, is notable for being the first game officially released for a non-Nintendo console, after the Tetris rights reverted to Alexey Pajitnov in 1996. The Tetris Company had been set up and had signed an agreement with Sony, giving a three year licensing right for the release of Tetris on the PlayStation in both Japan and the US. The game features a "Classic" single player mode, and a competitive "Battle" mode that allows up to 4 players to compete against each other.

The basic rotation is almost identical to that used in SRS, the one exception being the I tetromino: the spawn state, and the state achieved after 2 rotations in the same sense (a net 180° rotation) are swapped. Therefore, the I tetromino does not have a single rotation centre.

The wallkick behavior, however, is more akin to ARS, in that kicks are possible one cell left and right. Innovatively, there is no asymmetry (see Mihara's Conspiracy); the player is able to choose whether the tetromino will kick left or right by holding the appropriate direction on the d-pad. If no direction is held while the tetromino is rotated, no wallkick is tested.

A standard endless game of Tetris. The player's starting level is determined by the selected difficulty: "Easy", "Normal", "Hard" and "Expert" begin at levels 0, 11, 51 and 120 respectively. The player scores points and advances levels by clearing lines. No drop-scoring is awarded. For a given level, n, the player must clear a cumulative total of 10(n+1) lines to advance to the next level, and the scoring is as follows: 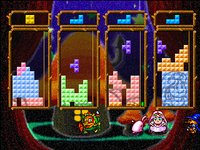 Up to 4 human (or CPU) players can compete against each other with the aid of a multitap. Graphically, this mode is in stark contrast with the rest of the game, and in fact uses the cartoon-style characters from Tetris Battle Gaiden. Unusual features in this mode include the playfield size of 7x17, the facility to stockpile garbage lines before sending them to opponents, and the ability to choose which opponent to target when sending garbage lines.