Difference between revisions of "Tetris Giant"

Tetris Giant (known as テトリス デカリス Tetris Dekaris in Japan) is a Tetris arcade game developed and published by Sega.[1] It was released for arcade on the Sega System SP platform in Japan in December 2009, and in the west in 2010.[2][3]

The word Dekaris comes from the Japanese word Dekai, meaning huge, and -ris from the word Tetris. The game is played using giant versions of ball-top joysticks called Dekacons, on a cabinet with a 70" projector screen. In 2-player mode, players can choose between cooperative or competitive modes.

As the name implies, everything is giant in Tetris Giant, including the blocks. The playfield is 6 × 7 instead of the normal 10 × 20. The game lacks several Guideline rules, such as hard drop, manual piece locking, and Hold function. Locking a tetromino fully above the 7th row will cause a Lock Out. Pieces appear in the 9th and 10th row, giving extra room to maneuver over the playfield.

Much like Sega Tetris, the pieces have a smooth drop animation instead of the usual step drop. The behavior of tetrominoes does not exactly match Sega Tetris, however; tetrominoes cannot slide under an overhang until they have fully landed. Tetrominoes can slide under an overhang early by rotating, but only if the piece is over half way down a cell in the drop animation. If a tetromino is less than half way down a cell, it can step back up onto the stack by rotating, or moving left or right.

Arcade operators can also enable Kids mode. When this feature is enabled, players are presented with the option to select either Kids or Standard modes at the beginning of the game. Kids mode limits the available tetrominoes JLOIT, while Standard mode features all seven tetrominoes. In Kids mode single player, only Line Challenge is available. 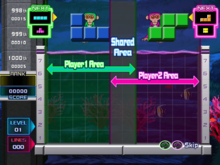 In Co-op mode, two players play cooperatively in a 12 × 7 playfield. The middle two columns are shared, and a player can not move their active piece past that area. You can swap each other's pieces up to three times by pressing the start button.

Although there is no visual indication, co-op modes feature a single 7 Bag randomizer shared between both players. Whenever a player places a piece, the second piece in their preview is filled from the shared 7 Bag. This obscured mechanic can result in one player receiving undesirable piece sequences with floods and droughts that would not otherwise be possible with Bag randomization.

Tetris Dekaris was announced by Sega on September 11, 2009, and was first playable at the 47th Amusement Machine Show on September 17, 2009.[4] In 2011, A 47” LCD version of the cabinet was also developed, but was only produced in limited quantities.

During the 47th Amusement Machine Show, Amusement Journal asked attendees to fill out a questionnaire of their favorite games. Tetris Dekaris ranked second most popular arcade game on the first two days, and most popular on the last day.[5] As of April 28, 2010, the official website listed 424 locations with a cabinet in operation in Japan.[6]

Arcade operators can select from two versions of the soundtrack to play in-game. The "Japanese Song" setting features the vocals performed by Team Dekaris, while the "Instrumental" setting replaces the vocals with other lead instruments.

A CD of the soundtrack was released on December 17, 2009. The CD includes both vocal and instrumental versions, as well as two bonus tracks not heard in-game.[7]

Sweets x Sweets would later make an appearance as one of the playable songs in Sega's rhythm game maimai. In maimai, the song is credited "Team-D," presumably to avoid inclusion of Tetris-related branding in a different game.