Tetris is an arcade game published by Atari Games released in February 1989.[1] 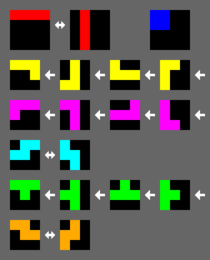