During the time of its creation, Pajitnov lived in the USSR and was not able to sell the game. He released the game for free, and it spread through the computer lab quickly taking time away from everyone's work. Vadim Gerasimov ported Tetris for the IBM PC, a more common platform in the west, allowing the game to spread even further. It wasn't until Robert Stein from Andromeda Software noticed the game at a computer lab in Turkey that the game got its first license inquiry. Stein contacted Pajitnov with a request to license the game for computers. Stein then sublicensed the game to Mirrorsoft in the UK, and Spectrum HoloByte in NA, which created and sold the first two titles in the game's franchise.

The name Tetris is a portmanteau of the words tetra, the greek prefix for four, which represents the tetrominoes, and tennis, Pajitnov's favorite sport. The term "Tetris" not only refers to the Tetris franchise, but also Tetris Line Clear, a special type of line clear, only possible with the I-tetromino, that clears 4 lines at once. It also refers to many games in the franchise simply titled "Tetris". 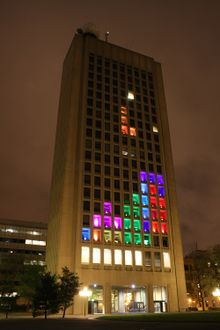