From TetrisWiki
Revision as of 11:19, 22 May 2021 by Oknazevad (talk | contribs) (Don't need this link anymore since it redirects to this article)
(diff) ← Older revision | Latest revision (diff) | Newer revision → (diff)
Jump to navigation Jump to search

Tetrinet is a PC based online multiplayer tetromino game, similar to Tetris, available as a free download. It is notable for its 12-block-wide playfield, which is wider than the average tetromino game's playfield, as well as its items, which players can use to attack other players.

Tetrinet uses its own rotation system based on that of Tengen's game. Tetriminos spawn with a random initial rotation, below the ceiling, in the center (rounded to the right if needed). 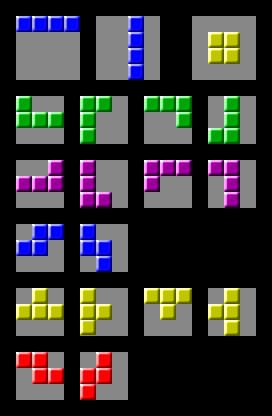 The tetriminos rotate as shown in the picture. I, S and Z alternate between two different states. The logic behind the uncommon and somewhat irregular behavior of J, L and T could be that all rotations of all tetriminos are placed top left in the bounding box (with the exception of I).

Tetriminos can kick out from the walls of the playfield but not from walls of blocks. There are no floor kicks.