Difference between revisions of "Super Tetris 3"

Super Tetris 3 is a game for the Super Famicom developed by Tose and published by BPS. In addition to regular Tetris it contains two new modes, Magicaliss and Sparkliss, as well as the franchise's first four-player mode Familiss.

The randomizer will reroll if a piece would appear three times in a row. This behavior is also seen in Tetris Plus.

When a player ends a game they will receive a rank based on their line clear count from that game.

Scoring is the same as in the original BPS version. Standard additionally only adds to the score at the end of each stage or after a top out, as in the BPS version.

In Magicaliss, each piece has a colour, either red, green or blue. The colour of a piece can be changed by rotating 4 times in the same direction. In addition, there are also flashing "almighty" blocks, which count as all colours, and smaller pieces made of silver blocks, which are never removed in a line clear. Clearing a line will clear all non-silver blocks in the line and blocks above will fall based on sticky gravity.

A single colour line clear is referred to as a "Magicaliss". It removes all blocks of the same colour as the line clear. It is possible to achieve a Magicaliss with any colour, including silver.

After a Magicaliss the piece falling speed will temporarily increase until the start of the next level.

Endless and Standard are available, and the level system works in the same way as Tetris.

In single-player the player can also activate Beginner mode, in which colours can be changed using the X and Y buttons. However, scores will not be saved.

This plays very similarly to Bombliss, except that the "bombs" explode in a range of their column and row. This, naturally, makes the playfield harder to clear than in the original Bombliss. Any square surrounded with explosions will also vanish. This has contest mode, and a puzzle mode, where you have a fixed sequence of limited pieces to clear the starting pattern.

Each mode can be played in 2-player mode. Selectable options are as follows:

Tetris uses individual piece queues. The pieces in each queue are the same.

Garbage is equal to the number of lines cleared. The garbage is single aligned gap with the gap changing every 10 lines.

Garbage is equal to the number of lines cleared and is purely silver blocks. A Magicaliss will send random blocks that fall from the top of the opponent's playfield.

Players can win by clearing the playfield of blocks. Garbage details are under investigation.

By holding X, L and R when pressing Start on the options screen, the player can access an alternate versus mode. 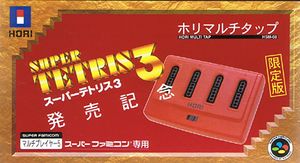 The Super Tetris 3 Hori Multi Tap, was a limited edition red version of the HSM-07

Mode for 2 to 4 players. When attempting to start the game with one player present, the game will refuse to start. A multitap is required for 3 or more players.

There is a target display at the bottom of each player's playfield. When lines are cleared the corresponding number of lines will be added or subtracted to the indicated player or players based on the target display. Garbage duplicates the bottom row.