Puyo Puyo Tetris 2 is a game that was released on December 8, 2020 for Nintendo Switch, PlayStation 4, PlayStation 5, Xbox One, Xbox Series X/S, and Microsoft Windows. It is the sequel to Puyo Puyo Tetris. One of the major additions is the new Skill Battle mode.

On December 2, 2020, a demo of the Switch version was released on the Japanese Nintendo eShop.

Like standard Versus modes, a player can send attacks using line clears or chaining Puyos. In addition to garbage being sent, attacks decrease the opponent's HP. Topping out causes the player's HP to drop by 1/4, and their playfield is reset allowing play to continue. A player loses if their HP reaches 0, regardless of how high their field was, and the other player wins if this happens.

Skills require MP to be used. Each skill has a different MP cost. It is displayed on the character card, along with the button to press to use said skill.

leveling characters, each character can equip up to 3 Special Skills. You can level up characters by playing Skill Battles in Adventure Mode. Skills gain levels too, and as the level goes higher, it will use less MP. 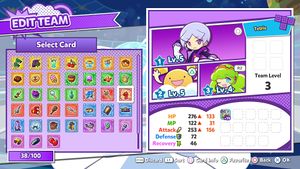