NullpoMino is a cross-platform, open-source fan game written in Java providing three versions: One using Slick, another using sdljava, the last using Swing. The game also simulates many Tetris games, as well as the TGM series and a few fan games, and also contains a utility for creating your own custom rotation systems.

NullpoMino is one of the few Tetris games, official or fan-made, with a truly cross-platform online versus mode. 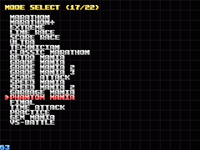 As of version 7.5.0, NullpoMino contains the following modes:

Since the game is made with Java, some users modded the game to include custom modes to change up the gameplay experience and add functionality to it. Such examples of these modes are Oshisaure's Demon Mode and 0xFC963F18DC21's Accelerator mode.