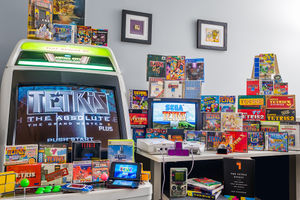 Officially licensed Tetris games have been released on a variety of platforms, and standalone products. It is the most ported game series, having been ported to over 70 unique platforms as of 2023.[1] Over 70 million physical copies have been sold, and an additional 100 million paid digital downloads as of 2010.[2] By 2014, the Tetris franchise had over 425 million paid downloads on mobile platforms, making it one of the most sucessful video game franchises by number of sales.[3]