From TetrisWiki
Revision as of 03:06, 18 May 2006 by *>Tepples (description based on a forum post)
(diff) ← Older revision | Latest revision (diff) | Newer revision → (diff)
Jump to navigation Jump to search

Arika Rotation System is a game play mechanic used in Tetris The Grand Master and other Arika tetromino games, derived from that of Sega's arcade Tetris game. 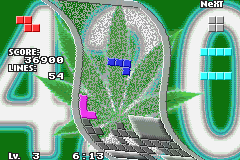 Tetris is an alternate reality.

My name is Damian Yerrick. I have a web site. I made Lockjaw: The Overdose, formerly called Tetanus On Drugs.

I also contribute to Wikipedia. (See my user page there.)

I am developing Lockjaw, an open-source customizable implementation of the guideline for PC (and possibly other platforms). Any specifics of Tetris game rules would be useful for me to add. See the page and the forum.

On July 15, I became a sysop on this wiki. If you want to discuss my actions, feel free to take it to my talk page.

To the extent possible, my contributions are dual-licensed under the Creative Commons Attribution License 2.5 and the GNU Free Documentation License 1.2 or later. is working on one.

Tetrominoes start out centered, rounding to the left. I goes in columns 3–6 counting from the left, O in columns 4–5, and others in columns 4–6. Each tetromino is spawned flat side up unless the player holds down a rotate button while the tetromino is being spawned, in which case it is spawned rotated by one unit (Initial Rotation System).